Short stage through some of the most known places of the Southern region of the Markgräflerland. Paths and ways through meadows partly with gravel, asphalted in the villages and towns. 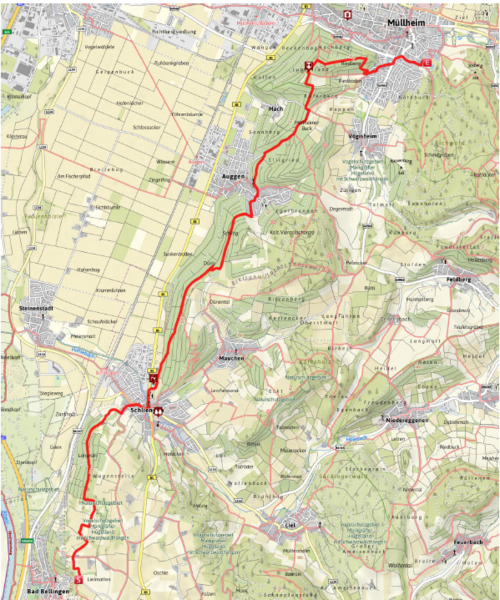 Starting point of the tour

Destination of the tour

This stage offers more scope for rests, and there are two larger villages Schliengen and Müllheim on the route which both have numerous places of interest. Perhaps there is some time left in the afternoon for a little detour to Badenweiler.
Those who do not want to walk up the street to Hertingen to the parking area Pfaffenacker can take the Markus-Ruf-Straße at the baroque church St. Leodegar. After having passed some vineyards you come back to the Markgräfler Wiiwegli at the signpost “Kirschenhof”. The path leads gently up and down at first through meadow orchards and broadleaf forests.

When descending to Schliengen, the hiker is accompanied by long rows of vines of the famous vineyard location “Schliengener Sonnenstück”.

At the entrance to the rest area “Ölacker” the Alemannic poet Johann Peter Hebel (1760 - 1826) urges leisure: " Gang lueg e'wenig d'Gegnig a, i glaub, du wirsch e'Gfalle ha." - loosely translated: “Enjoy the scenery for a certain while, I think you will like it”.

At the end of the village Schliengen, the Wiiwegli passes the first winegrowers’ cooperative in the region of Markgräflerland founded in 1908. The old “Trotte”, an historic wine-press from the 17th century, reminds of the high importance of hygiene in wine production already in earlier centuries. Up to Auggen the path leads through the vineyard locations "Schliengener Sonnenstück" and later through "Auggener Schäf” which are known for their top-quality wines.

On the way the hiker learns many interesting things about grape varieties and wine production written on numerous information boards. At the entrance of the village Auggen, the wine path turns sharp left and leads to the Protestant Church which has an exposed location above the village. Directly next to the church there is an historic ice and storage cellar which proves that the Markgräfler people do not only drink wine. Friedrich Sexauer had this cellar driven into the loess in 1863 for his brewery.
Past mighty old cherry trees at the Müllheim Buck, the Wiiwegli aims at the highest point of this stage, the Luginsland. The hunters’ monument can be seen from the distance, a small tower with a romantic balcony. Luginsland offers wonderful views over the Rhine Valley to the Vosges mountains and over Müllheim and Badenweiler to the mountains Blauen and Belchen.

The path continues past the Hachberg lime-tree which invites to have a rest on its circular bench. (The shortest way to the station which is outside of town branches off at this place.) From Luginsland you walk through vineyards and pass allotment gardens and reach the town centre of Müllheim after only some kilometres.